Rava Idli is a soft, pillowy steamed savory cake made from rava or cream of wheat batter that makes for a satisfying and healthy breakfast.

How is Rava Idli Made

Rava Idli is a popular variation of the traditional South Indian Idli made with fermented rice and lentil batter. Rava, also known as suji in Hindi and cream of wheat or semolina in English, is simply granulated wheat.

It is made with mixing ghee roasted rava (sooji or cream of wheat) with curd (yogurt), spices, herbs, cashews, water and a leavening agent like baking soda or eno (fruit salt) to make a nice batter of medium consistency.

The reaction of alkaline eno or baking soda with the acidity of the yogurt helps in leavening the batter thereby giving it a soft and fluffy texture. This flavorful batter is then steamed in an idli maker to make fluffy, pillowy cakes.

Traditionally, idli is made from rice and lentils, which involves soaking the rice and lentils for 4 to 5 hours as well as grinding the lentils and then fermenting the batter.

As this recipe uses rava (cream of wheat), yogurt and a leavening agent instead, we do not need all that soaking or grinding time, thus making this an instant recipe.

For that reason, I make rava idli when we want some quick and easy breakfast or snack. The rava idli batter gets made within minutes and then, as the idli is steaming, I prepare the coconut chutney, which is the traditional dip to serve with idli.

About this Rava Idli Recipe

Being an Idli and Dosa lover, I never say no to the different idli varieties out there. For this instant rava idli recipe, I have found the perfect combination of ingredients to make these savory cakes soft, moist, fluffy and delicious.

I have compiled below some frequently asked questions from readers on this rava idli recipe.

How to make Rava Idli

1. Heat 2 tablespoons ghee in a pan. Keep the heat to low or medium-low. Add 14 halved cashews.

2. Stirring often fry the cashews till golden. Remove with a slotted spoon draining the ghee and keep aside. Reduce the heat to low or medium-low.

5. Stirring often fry chana dal till they look golden and crunchy. Then add ½ teaspoon cumin seeds and fry for 4 to 5 seconds.

9. Mix the rava very well with the ghee and other ingredients.

10. Roast rava till it become aromatic, changes color a bit (but should not get browned or golden) and the grains look separate. Keep on stirring often when roasting rava. Roasting rava will takes about 7 to 10 minutes depending on the thickness and heaviness of the pan and the flame intensity. Once the rava is well roasted, keep the pan aside. Let the rava become warm.

11. To the roasted rava, add 2 tablespoons finely grated carrots, 2 tablespoons chopped coriander leaves and ½ teaspoon salt or add as required. If adding any other grated veggies or steamed peas then add them at this step.

13. Mix very well and let the batter rest covered for 20 minutes. The rava idli batter is neither thick nor thin in consistency and has a medium consistency.

14. Brush oil or ghee on the idli pan moulds. Place a fried halved cashew in the center of the moulds.

15. Before you add eno or baking soda to the batter, take 2 to 2.5 cups water in a pot. Keep a small length trivet stand or a rack in the pot. Heat the water till it comes to a boil.

17. Sprinkle 1 teaspoon eno or ¼ teaspoon baking soda evenly over the batter. I have used eno.

19. Pour the batter in the idli moulds.

20. Stack the each idli plate and place them in the pot with the hot water. Cover with a lid and steam rava idli for 10 to 12 minutes.

21. I have used the Instant Pot for steaming and had set the time for 10 minutes (check notes section in recipe card on finer details for steaming in the IP as well as pressure cooker and pan). Keep a stop-watch or timer to check the time as Instant Pot does not beep in the steaming mode after the steaming time is over. It will continue to steam further. You can even steam rava idli in an electric cooker, pan or pressure cooker for 10 to 12 minutes.

22. To check the doneness, a toothpick or wooden skewer inserted in the rava idli should come out clean. Remove the idli plates carefully and let them rest for 3 to 4 minutes. Then with a spoon remove the rava idli.

This recipe post from the archives (November 2013) has been republished and updated on 9 June 2020.

Many of my recipes have detailed step by step photos and useful tips to help you make it easily and perfectly.

Rava Idli are quick, instant easy idli variety made with sooji or semolina. These sooji idli requires no grinding and fermentation. 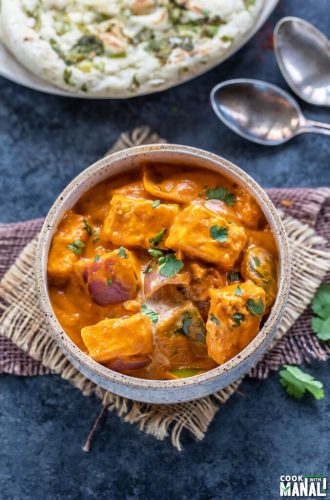 Paneer Tikka Masala is a popular Indian curry where cubes of paneer (Indian cottage cheese), onions and peppers are marinated with yogurt and spices, grilled and then tossed in a creamy tomato based curry. This dish goes extremely well with butter naan or paratha or basmati rice.

You know the most famous Indian food in the world? It is Chicken Tikka Masala, at least that’s what I think. You talk to anyone in the UK or USA and even if they don’t know much about Indian food they definitely know about chicken tikka masala. I think the dish is synonyms with Indian food in the west. The vegetarian version of it is of course Paneer Tikka Masala which is also quite popular and you would find it on the menu of most Indian restaurants.

Growing up in India, I had never heard of paneer tikka masala. Sure, we had paneer tikka but adding it to a curry was unknown, at least to me. I remember watching a MasterChef India episode some 10 years back which had chef Vikas Khanna and chef Kunal Kapoor talking about the origin of this dish. They also shared a recipe and so this recipe is inspired from their version.

They of course shared the recipe for chicken tikka masala but I changed it to paneer tikka masala and also made few changes depending on my preferences and availability. This recipe uses curry powder which is a common spice mix in the west (again this spice mix doesn’t even exist in India) and it makes sense since this dish originated in the UK. There are stories of how a chef added cream sauce to chicken tikka to please the taste buds of British people and that’s where it originated from.

There are 2 parts to this recipe- the tikka part where paneer, onions and peppers are marinated with yogurt and spices and then grilled. You can cook the tikka in tandoor, oven or in your pan. The other part of the recipe is the curry which is a smooth curry made with onions, tomatoes, cream and butter. The grilled tikka is added to the curry and then served as a main course with side of bread.

There are 2 parts to this recipe- the paneer tikka and the curry.

Paneer: you can use either homemade or store bought paneer but whatever paneer you use, it should be firm and be able to hold it’s shape. You can find paneer at Indian grocery stores or make it at home.

Yogurt: for the marinade, it is best to use thick yogurt. Either use Greek yogurt or if using regular yogurt, use store bought yogurt which tends to be thicker than homemade yogurt. If using homemade yogurt, strain it using a muslin cloth for at least 3 to 4 hours to get rid of all the excess water.

Curry base: the base is made with onions, tomatoes, ginger and garlic which is quite a staple for most creamy Indian curries. I like using white onion for that sweet, subtle flavor.

Spices: this paneer tikka masala recipe uses curry powder which is a mix of spices and is popular in the western world. It’s not so much popular in India actually, in fact I didn’t even know it existed until I moved out of India. If you don’t have it, you can use a blend of coriander, cumin, turmeric and ginger.

Flavor enhancers: to make the curry creamy, we finish the recipe with butter, cream and cilantro!

1- We will start by making the paneer tikka. To a large bowl, add yogurt (1/3 cup + 1 tablespoon), make sure the yogurt is thick (if using regular homemade yogurt, drain the yogurt for 3 to 4 hours before using in the recipe). To that add the following:

2- Using a spatula or whisk, mix until all the ingredients are well combined.

4- Mix until the paneer, onion and peppers are well coated with the marinade. You can use your hands here. Cover the bowl and refrigerate for 30 minutes at the least.

7- Stir and cook for around 5 to 6 minutes until onions turn light golden brown in color, stir often in between.

8- Then add 3 large tomatoes (chopped) along with the following:

9- Stir and cook the tomatoes for 7 to 8 minutes until soft and completely cooked. This step is important so do not rush this step.

10- Once the tomatoes are completely cooked, remove the pan from heat. Let it cool down a bit and then remove the cinnamon stick and transfer everything to a blender and blend to a fine paste. Set this aside.

11- Back to the tikka now, take the marinated paneer out of the refrigerator. Now, you can cook this in a pan or grill or in your oven. I have used a grill pan that I had. Spray the pan with oil and then add the marinated paneer, onions and bell peppers on the pan.

12- Cook until the paneer turns light golden brown in color and onions and peppers are slightly cooked, turning them few times in between for even cooking. Now it’s time to bring the curry together.

Oven instruction: arrange tikka on skewers and bake at 450 F degrees for 10 minutes and then broil for 2 to 3 minutes to get it browned (optional).

13- Now put the pan back on medium heat and add the pureed paste to it that we had prepared earlier. You can also add remaining 1/4 teaspoon Kashmiri red chili powder at this point if you prefer a brighter color of the curry.

14- Add 1 cup water (or more depending on how much gravy you want), and stir well. Then add remaining 1 tablespoon butter, 2 to 3 tablespoons cream and 1 to 2 tablespoons chopped cilantro. Mix and let it cook for 2 minutes.

15- Add the roasted paneer, onions and peppers into the curry.

16- Mix well and let it simmer for 2 to 3 minutes. Garnish with more cilantro and serve paneer tikka masala with naan or paratha.

You can serve paneer tikka masala with the following:

For a vegan version of this recipe you can do the following substitutions:

What can I substitute the curry powder with?

They are both popular paneer recipes but the way you make them is different. For the tikka masala, we first marinate the paneer, grill it and then add to the curry. For the paneer makhani, the sauce is made with nuts, onions, tomatoes and then paneer pieces are added to it directly.

If you’ve tried this Recipe then don’t forget to rate the recipe! You can also follow me on Facebook, Instagram to see what’s latest in my kitchen and on YouTube to watch my latest videos. 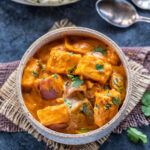