A traditional British recipe, this perfect Welsh rarebit is the ultimate quick and easy lunch – made with a gooey cheese sauce, and grilled to perfection on crispy bread.

If there was ever a recipe that wholly embodies the name of this website, ‘easy cheesy vegetarian’, it’s Welsh rarebit – and since I’m half Welsh, I thought it was fitting that I share this recipe. It’s such a simple one, but if you’re a fan of gooey cheese, it’s really rather spectacular, and makes a perfect easy lunch.

Is Welsh rarebit the same as cheese on toast?

We Brits are known for our ‘does what it says on the tin’ kind of recipes, and cheese on toast is one of our best.

You really don’t need a recipe for it.

But Welsh rarebit isn’t quite the same as a standard cheese on toast. It’s a little more interesting – and a lot more delicious – because it uses a gooey cheese sauce, rather than plain slices of cheese.

What is Welsh rarebit?

There are a million stories about how Welsh rarebit came about, where it got its bizarre name from (it’s also sometimes known as ‘Welsh rabbit’ – don’t worry, no rabbits were harmed in the making of this dish), and even whether it’s truly Welsh or not.

But wherever it came from, it’s an incredible dish that deserves to be shared.

Welsh rarebit begins with a super thick cheese sauce, smeared over a crispy piece of toast, and grilled until it’s golden brown on top.

It only takes a few minutes more than regular cheese on toast, and it’s totally worth the extra effort.

How to make perfect Welsh rarebit

There are all sorts of different recipes for Welsh rarebit.

Some use beer, some don’t.
Some use real mustard, and others use mustard powder, or even no mustard at all.
Some recipes use Welsh cheese and others just use cheddar…

Nobody can really agree on just one Welsh rarebit recipe.

So this is just my version!

I begin with a really simple béchamel sauce (white sauce). You can find step-by-step instructions for how to make a white sauce here, but it’s essentially just flour cooked in butter, with some milk added.

You can swap a little of the milk out for some beer, if you want some real indulgence.

You need to make the sauce quite a bit thicker than you would if you were making, say, macaroni cheese – otherwise, it will all drip straight off the bread and you’ll end up with a big mess. A tasty mess, but a mess nonetheless.

Instead, the sauce should be thick and spreadable – more of a paste, really.

Of course, you can’t have Welsh rarebit without plenty of cheese.

Choose a good quality cheese with plenty of flavour. I went for an extra mature cheddar, but a Welsh cheese like Caerphilly would be fitting too!

I also added a dollop of mustard and plenty of black pepper.

Stir it well until the cheese has melted into the sauce and it’s all thick and gooey.

Step 3: Spread it on toast, and grill

You can use any type of bread for Welsh rarebit, but I like to use something a bit more special than a mass-produced white loaf. This time I used some slices from a nice crusty bloomer loaf.

I like to pre-toast the bread, so it gets crispy on the underside. Then, spread the thick cheese sauce on top.

Pop the tray under the grill (broiler) for a few minutes until the cheese sauce is bubbly and hot, with crispy golden brown patches on top.

All that’s left to do is eat!

How to serve Welsh rarebit

In my eyes, Welsh rarebit is definitely a lunch dish, so I don’t tend to do anything fancy with it.

Just a bit of salad on the side is perfect – perhaps some lettuce, tomatoes, or cucumber.

A lot of people splash their Welsh rarebit with a few drips of Worcestershire sauce just before serving. The issue is that Worcestershire sauce isn’t actually vegetarian – but Henderson’s relish is a good vegan substitute. It’s a pretty specialist ingredient, but you can find it online if needed (Amazon US* / Amazon UK*). 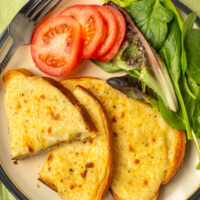 For a richer flavour, you can replace a little of the milk with a splash of beer (light or dark, depending on how strong you want the flavour to be). As this is such a simple recipe, make sure you use a good quality bread and a flavourful mature cheese.

Note: Nutritional information is approximate, and will depend on exactly what ingredients you choose. Information above is for 2 slices of Welsh rarebit.

Here’s another authentic British recipe – my homemade suet dumplings (perfect for cooking on top of a hot stew!)

* Note: This post contains some affiliate links. If you make a purchase using one of these links, I will receive a small payment. 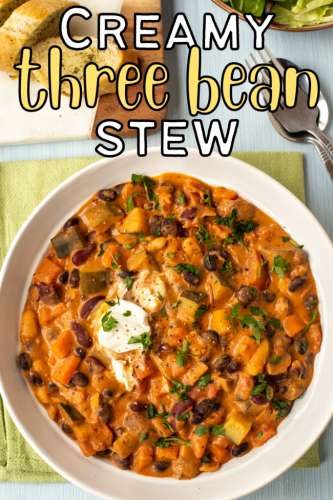 This creamy three bean stew is the ideal healthy comfort food – with fresh veg and three types of beans, in a luxurious creamy tomato sauce!

This creamy three bean stew is basically my perfect dinner. It feels like a luxurious, comforting meal, but is packed with fresh vegetables and protein-rich beans (three kinds, in case you couldn’t have guessed) – all coated in a creamy, silky sauce with heaps of flavour (swoooon).

It ticks all the boxes!

Veggie-packed comfort food has got to be my all-time favourite food category, and it doesn’t get much better than this creamy three bean stew. It’s absolutely full of goodness, but is about as far from rabbit food as you can get (I’ve never been much of a salad person).

After eating a meal like this, you feel totally satisfied, and your body thanks you too.

There are 3 main elements to this hearty vegetarian stew:

As long as you make sure your bean stew contains these three elements, it will be a success – even if you decide to switch things up a bit (see below for some ideas for how to adapt the recipe!).

Step 1: Fry off the vegetables

Start by dicing your veggies, and adding them to a large saucepan. Cook them for a few minutes until they’re just starting to soften.

Step 2: Add most of the remaining ingredients

We’re already at the ‘add everything else’ stage – this recipe really couldn’t get much simpler.

Add the beans and sauce ingredients to the pan, and leave everything to simmer for a little while, until the sauce has thickened nicely and the vegetables and beans are totally soft.

As a little finishing touch, I like to add one more little dollop of something to make it extra creamy. To be honest, there are lots of ingredients you could use for this purpose, which would all have pretty much the same effect:

Just be careful if you’re using the low fat version of any of these ingredients, as low fat dairy products can sometimes split and curdle in this kind of situation.

It’s best to stick to the full fat version if you can, or if you really want to use low fat, temper the ingredient first. To do this, mix a spoonful of your hot stew into the yogurt (or whatever you’re using) first, then add it all back into the pot. This helps to minimise the temperature shock, and reduces the risk of curdling.

The difference that one good dollop of sour cream had on my three bean stew was really pretty amazing:

It makes the whole thing so much more luxurious, and transforms a simple bean stew into something seriously tempting.

How to serve three bean stew

This stew already contains all the most important food groups, so there’s no need to serve anything alongside it if you don’t want to. Just a nice big bowl and a spoon are all you need.

Personally though, I think a bit of garlic bread or some crusty bread and butter are absolutely perfect for mopping up the bowl and adding a nice bit of crunch…

How to adapt the recipe

One of the best things about this recipe is that it’s endlessly adaptable – it’s such a good fridge clearer. I would be willing to bet that almost all of you could make this three bean stew entirely from ingredients you already have in the house.

Who doesn’t already have a cupboard full of random tins of beans? And a fridge full of veggies that could do with being used up?

Just chuck ’em all in – the more the merrier.

You could choose different vegetables, different beans, or adjust the sauce ingredients, and you’ll almost certainly still end up with a really tasty meal. In fact, it’s pretty fun if it ends up slightly different each time you make it. 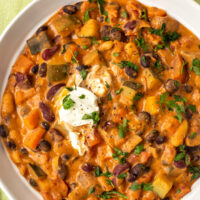 Feel free to use different vegetables or different beans, depending on what you have in the kitchen.

It’s best to use full fat dairy products for cooking, as low fat varieties tend to split and curdle when added to heat. If you really need to use a low fat dairy ingredient, temper it before adding it to the stew. To do this, mix one spoonful of the hot stew into the low fat yogurt (or whatever it is), and stir it together. Then add it back into the stew. This reduces the temperature shock to the yogurt, and minimises the risk of curdling.

Note: Nutritional information is approximate, and will depend on exactly what ingredients you choose. Information above is for 1/4 of the recipe.