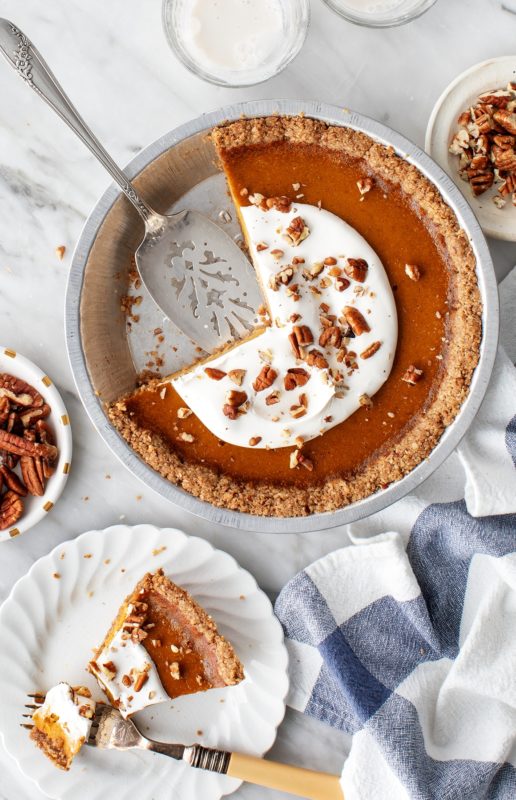 Growing up, my favorite part of Thanksgiving was the pumpkin pie. All year, I’d look forward to that creamy, cinnamon-y, custardy filling. I loved pumpkin pie filling so much that I’d scoop it right out of its pie crust, leaving a triangle-shaped shell of pastry on my plate. I’d then pass it to my Dad (who ate everything my sister and I left behind), and ask for another slice.

As an adult, I often opt for apple crisp because I don’t think Jack will eat all of my empty crusts (ok, actually, he might), but either way, that’s not an issue anymore! Today, I’m here to tell you about the BEST pumpkin pie recipe, which uses a delectable brown sugar pecan crust in place of traditional crust. Toasty, nutty, and crisp, this crust contrasts perfectly with the creamy filling… and, of course, the flavors of pumpkin pie spice and pecans just belong together. This is pumpkin pie perfection and you won’t want to leave a crumb behind!

The recipe comes from Jillian Harris and Tori Wesszer’s gorgeous new book Fraiche Food, Full Hearts, which came out at the perfect time. Not only is it filled with delicious looking (mostly plant-based) recipes, but it’s organized around celebrations. Right now I have my eye on their vegetarian Thanksgiving menu, which has a Mushroom Wellington recipe as the main course, and their Christmas menu, which includes Potato Garlic Cauliflower Mash, Sticky Apple Date Toffee Pudding, and Vegan Eggnog. Tori’s recipes have a healthful slant (she’s a registered dietician), and she also has a a beautiful blog, Fraiche Nutrition, that I recommend you check out! 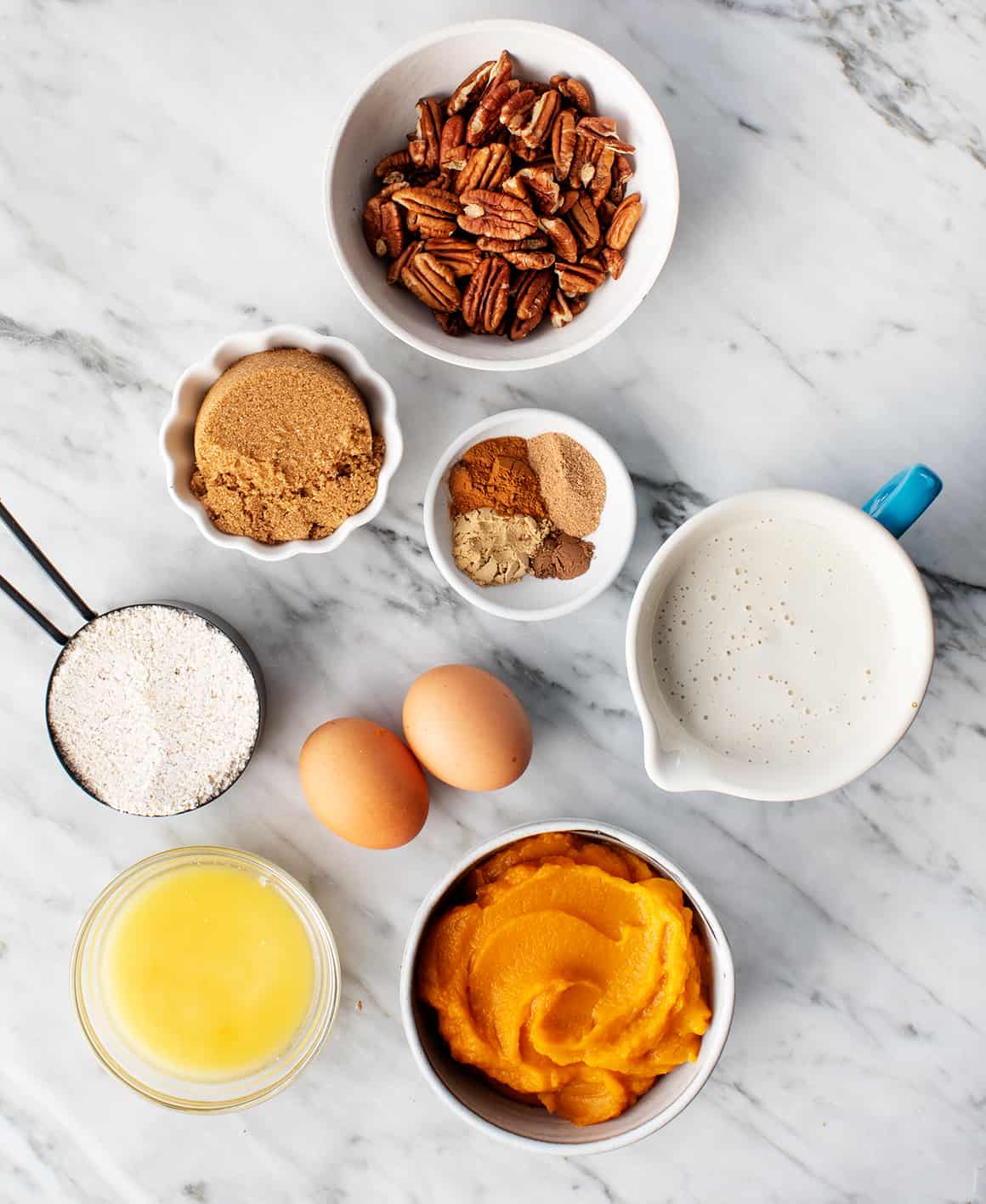 Here’s what you need to make this homemade pumpkin pie recipe:

How to Make Pumpkin Pie

Ready to bake? Here’s what you need to do:

First, make the crust. In a food processor, pulse the crust ingredients until they are finely ground and stick together when pressed between your fingers. Transfer the mixture to a 10-inch pie pan and press it evenly and firmly over the bottom and sides of the pan to form the crust.

Next, bake the crust in a 350-degree oven for 12 minutes, until it looks slightly cooked, but not brown. The crust may puff up a bit as it bakes, but don’t worry! There’s no need for pie weights here – it will deflate as it cools.

While the crust cools, whisk together the filling. Combine the pumpkin puree, spices, cashew cream, brown sugar, and eggs in a large bowl, and whisk until smooth.

Then, assemble and bake the pie! Pour the filling into the crust and bake until the center is set, 30 to 40 minutes. Allow it to cool completely before slicing. I recommend serving it with whipped cream or coconut cream. I also like to sprinkle mine with extra toasted pecans for crunch. 🙂

Without question, I’ll be making this pumpkin pie recipe for my family’s Thanksgiving dinner, and I hope you do too! If you want more ideas for putting together a beautiful, plant-forward holiday meal, I heartily recommend you check out Fraiche Food, Full Hearts!

If you’re looking for more ideas for your Thanksgiving feast, try any of these favorite recipes:

*You can skip soaking the cashews if using a Vitamix Blender.

“I want you to come watch the movie with us ON the couch, not be in the kitchen!”

I’ve been filling out this one-question-a-day journals for moms that I received for Christmas. It records a little thought or memory over the last year, and then starts again, so you can see how your answers change over a few years. One of the recent ones, prompted me to jot notes about what I am learning as a mom, and I found the question so general I was basically annoyed. I am a romantic, and also wildly pragmatic. In the span of a day I can tear up over the depths of love I feel for my kids, and also wish for them to have a mute button. We all have worlds within us; mothering pushing me into the corners of myself I am sometimes proud of or other corners ashamed of, but am I learning? Yes, every single day. Sometimes in the moment and other times after a particular season. But in 2021, my answer in the bullet journal was that I see my kids are wanting me to play with them. They aren’t registering all the service and shuttling and laundry and what it takes to pull off a week, they just want to play WITH me. It’s natural for me to move within lists and tasks and responsibilities and hustling, but playing is something I have to pay attention to. For them and for me. We usually do a family movie on Friday nights and my son (6.5), see quote above, pointed out that I don’t actually watch the movie, I tinker in the kitchen and he wants me in the couch cuddle. Flattered, and found out that I’d rather make granola than watch The Croods 🙂 So from annoyed, to passing on the question to fellow parents, what are you learning? Try not to be annoyed. Maybe circle back to it.

I published this recipe over on SKCC a few weeks ago and wanted it to live here. We’re trying to find more family-friendly vegetarian recipes (it’s easy for me to fill up on roasted veggies and big salads, not so much for the kids). This batch lasts us two meals – once with noodles, maybe half zoodles, and the second round on toast or english muffins with cheese melted on top, like a pizza sort of thing? It freezes well and is great to deliver to new parents.

In a large Dutch-oven or stockpot, heat the olive oil over medium low heat.

In a food processor, pulse the onion and garlic into smaller bits. Add them to the pot with a big pinch of salt and pepper. Sauté to soften, about 3 minutes.

Pulse up the cauliflower florets to get a rice-like texture. Add the riced-cauliflower to the pot and sauté to soften, about 5 minutes.

Pulse the walnuts in the processor and add those to the pot along with the Italian seasoning, fennel seed, another few generous pinches of salt and pepper, tomato paste and balsamic vinegar. Sauté until fragrant.

Add the red wine, cook about 3 minutes, then add the crushed tomatoes, ½ cup water, lentils, pinch of pepper flakes and stir to combine. Turn the heat to low, put the cover ajar and let it simmer gently for 30-35 minutes. Turn off the heat, taste for seasoning and adjust.

Cook your pasta or zoodles according to instructions. Top with cauli Bolognese, grated cheese, fresh basil and enjoy!

The Bolognese will keep in the fridge for a week and can be frozen for a few months.